• Increasing numbers of children are picking up a tennis racket for the first time through the ITF’s Junior Tennis Initiative, with 23.1% more players, 15.5% more school teachers and coaches delivering sessions and 47.1% more competition entries recorded in 2021

• ITF’s latest financials mean the global governing body of tennis has contributed more than $600 million to support the game from playground to podium in the last ten years, on top of investment from national tennis associations around the world ($621.9m, £527.2m or €623.9m)

• ITF’s Annual Review points to financial recovery as the world emerges from the Covid-19 pandemic, which cost the international federation $75.2 million in revenues over two years 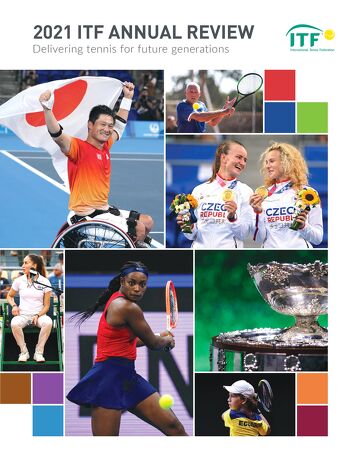 Click the cover image to read the 2021 ITF Annual Review

More young people are picking up a tennis racket for the first time, according to the latest annual reporting data released today by the world governing body of tennis, the International Tennis Federation (ITF), as the sport rebounds from the global pandemic.

The ITF’s Junior Tennis Initiative – which introduces tennis to 14-year-olds and under – saw 213,212 children participating last year, up by 23.1% from 173,194 during the previous 12 months. Just over half of participants (51%) were girls across a record 142 countries where the initiative was delivered.

The ITF initiative is the launch pad for many aspiring competitive players. It is highly encouraging, therefore, for the sport for competition entries amongst participating children to increase by 47.1% last year to 193,231, up from 131,375 entries in 2020.

By comparison, at the highest level of global tennis, the Davis Cup enjoyed its highest participation in 20 years with 137 nations competing in the latest edition of the men’s World Cup of Tennis (four more than in 2019). The Billie Jean King Cup, the women’s World Cup of Tennis, attracted its highest participation ever, with 107 nations competing (14 more than previously).

Global development of the game

“There are more than 87 million tennis players around the world and all of us at the ITF are committed to increasing participation levels even further. It’s vitally important that the game is for everyone; for all ages, genders, playing standards and physical abilities, and anywhere the game can be played, which we are working hard to ensure is everywhere, in one form or another.

“Following the pandemic, to see more children picking up a racket as part of the ITF’s Junior Tennis Initiative is hugely rewarding and a sign that things are on a positive track for the future. At the very core of ITF2024, our strategy for sustainable growth, is developing the game globally and how we can support national tennis associations in delivering around the world. Together, with the right strategy, funding and commitment, I believe the future is very bright for our sport.”

A decade of major investment in the world game

The ITF also revealed today that it has contributed more than half a billion US Dollars over the last decade into tennis globally, in addition to the significant contribution of national tennis associations around the world.

Between 2012 and 2021 the ITF invested $621.9 million – or £527.2 million or €623.9 million – to support all aspects of the game, including funding for staging major events such as the Davis Cup and the Billie Jean King Cup and their associated participation payments and prize money; tennis development programmes, grants and education costs; tours and player pathways, including the ITF World Tennis Tour (and Juniors), junior team competitions, UNIQLO Wheelchair Tennis Tour, Seniors tennis and Beach tennis; investments in integrity, science and technical aspects of the game; commercial development; and communications and marketing to promote the sport globally.

Given the ITF’s mission is to deliver tennis for future generations, each year it reinvests approximately 90% of its income back into growing the sport and this level of investment is set to continue. This means that a growth in the ITF’s commercial revenues as it continues to recover from the Covid-19 pandemic and develop the game globally will produce more funding for tennis.

In addition to the ITF’s reinvestment into the game, funding for the development of tennis is also provided by the four Grand Slam tournaments via the Grand Slam Player Development Programme (GSPDP). Since its inception in 1986, the programme has contributed more than $57 million to international player development. In 2021 the GSPDP delivered $1.12 million in support of talented players worldwide through grants, tournaments and touring teams. This investment was pandemic-impacted in 2021 but is expected to return to the pre-pandemic figure of circa $3 million in 2022.

The ITF’s newly published Annual Review containing its fully-audited 2021 financials confirmed that the international federation’s operating income in 2021 grew to $66.6 million from $35.6 million in 2020, having been impacted over the course of two years due to the Covid-19 pandemic. The last full year of pre-pandemic accounts was 2019, when the ITF generated operating income of $88.7 million.

In 2021 the ITF chose to draw on $5.5 million of its reserves in order to continue to deliver high levels of investment. The ITF has built significant financial reserves for such an eventuality through prudent financial management and at the end of 2021 still held reserves totalling $44.4m.

The Covid-19 global pandemic cost the ITF more than $75 million in revenues over two years (2020 and 2021) when compared to 2019 operating income. For example, the Billie Jean King Cup and Davis Cup generate vitally important revenues for the ITF to reinvest back into tennis. Those competitions taking two years to complete over the course of 2020 and 2021 reduced their financial contribution in this period, before they have returned to annual contests from 2022.

“It’s a source of real pride that the ITF has been able to contribute more than half a billion dollars to tennis globally over the last ten years. We are working hard to develop and support the health of the game around the world, for all abilities and ages to play, and for the enjoyment of more than a billion fans. It’s so important we remain robust financially to ensure strong grassroots funding right through to the highest levels of our sport, and we embrace innovative ways in which people can participate or engage with the game and its variants, from beach tennis to padel tennis.

“I’m confident we’re on a growth trajectory as we recover from the challenges of the global pandemic and I’m proud of how the ITF team and the global tennis family is responding. Now, as one generation of heroes evolve into the next stage of their lives having made such an incredible contribution to our sport, the next is stepping up; whether that’s in the playground, on the podium or everything in between.”

Uniqlo, the Japanese fashion brand, has extended its sponsorship agreement with the International Tennis Federation (ITF) for a further two years.

This will see the brand continue as the title sponsor to the Wheelchair Tennis Tour until 2024, as it has been since 2014.

To mark International Women’s Day, the ITF has today announced the launch of a new Leadership Development Programme as part of its Advantage All strategy.